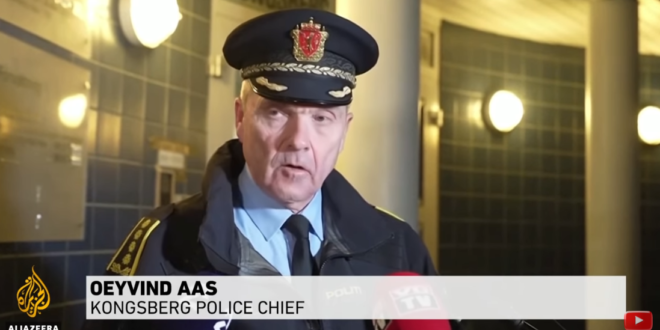 Four women and a man were killed and two others wounded when a man used a bow and arrow to attack them in Norway. Police first received word of an attack in the town of Kongsberg, south-west of the capital Oslo, at 18:12 local time (16:12 GMT).

A Danish man aged 37 has been arrested and questioned for hours overnight. Police said they had previously been in contact with him over fears of radicalisation after he converted to Islam.

The victims were all aged between 50 and 70, regional police chief Ole Bredrup Saeverud told reporters on Thursday morning. The attack was Norway’s deadliest since far-right extremist Anders Behring Breivik murdered 77 people, most of them at a children’s Labour Party summer camp on the island of Utoya in July 2011.

Read the full article. As I predicted yesterday, right wingers are leaping upon the attack as evidence that gun control is useless.

#UPDATE A Danish man suspected of killing five people with a bow and arrows in #Norway had converted to Islam and was previously known to police over fears that he had radicalised, officials said Thursday https://t.co/34Sw9lbmYL #Kongsberg

A man in Norway just killed a bunch of people with a bow and arrow.

Norway has some of the strictest gun laws around, yet mass killings still occur.

Liberals need to understand it is not the gun – it is the criminal who commits the act!

In Norway, 5 people were just killed by bow and arrow.

In Las Vegas, Stephen Paddock shot and killed 60, while another 411 were wounded by gunfire.

But sure, basically the same thing.