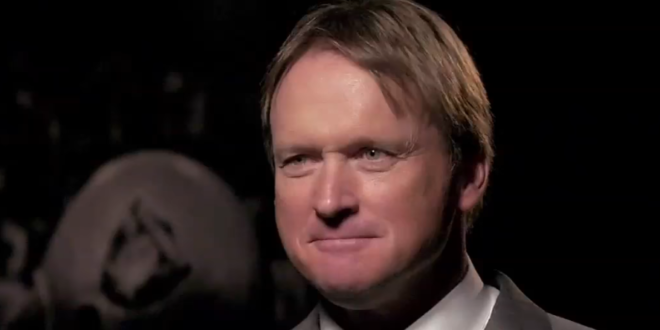 Jon Gruden’s time in the NFL is over. According to multiple reports, Gruden informed his staff he will resign as head coach after a series of emails showed him delivering racist, homophobic and misogynistic comments in emails during his time at ESPN. Gruden later announced through the Raiders he was resigning.

“I have resigned as Head Coach of the Las Vegas Raiders. I love the Raiders and do not want to be a distraction. Thank you to all the players, coaches, staff, and fans of Raider Nation. I’m sorry, I never meant to hurt anyone,” he said in a statement.

Gruden’s messages were sent to Bruce Allen, the former president of the Washington Football Team, and others, while he was working for ESPN as a color analyst during “Monday Night Football.” In the emails, Gruden called the league’s commissioner, Roger Goodell, a “faggot” and a “clueless anti football pussy” and said that Goodell should not have pressured Jeff Fisher, then the coach of the Rams, to draft “queers,” a reference to Michael Sam, a gay player chosen by the team in 2014.

In numerous emails during a seven-year period ending in early 2018, Gruden criticized Goodell and the league for trying to reduce concussions and said that Eric Reid, a player who had demonstrated during the playing of the national anthem, should be fired. In several instances, Gruden used a homophobic slur to refer to Goodell and offensive language to describe some N.F.L. owners, coaches and journalists who cover the league.

The Wall Street Journal reported Friday that one of Gruden’s emails included a racist comment in reference to NFL Players Association executive director DeMaurice Smith. Gruden, who was employed by ESPN at the time as the lead analyst for Monday Night Football, said Friday that he is “ashamed I insulted De Smith” and added that he “never had a racial thought” when he sent the email.

Although not with a team at the time, Gruden was still influential in the league and highly coveted as a coach. He had won a Super Bowl with the Tampa Bay Buccaneers following the 2002 season. And in 2018, he was hired for his second stint as the head coach of the Raiders franchise, which includes defensive lineman Carl Nassib, the first active N.F.L. player to publicly declare that he is gay.

Jon Gruden resigns as head coach of the Raiders. pic.twitter.com/Npnoqd8YQD

Jon Gruden resigned as the coach of the Las Vegas Raiders on Monday. He had denounced the emergence of women as referees, the drafting of a gay player and the tolerance of players protesting during the national anthem, a review of his emails showed. https://t.co/mNUDnhYZfd pic.twitter.com/RFyEMHiSxL

It was terrible of the cancel culture to create dozens of racist, homophobic, transphobic, misogynistic emails using Jon Gruden’s account all those years.