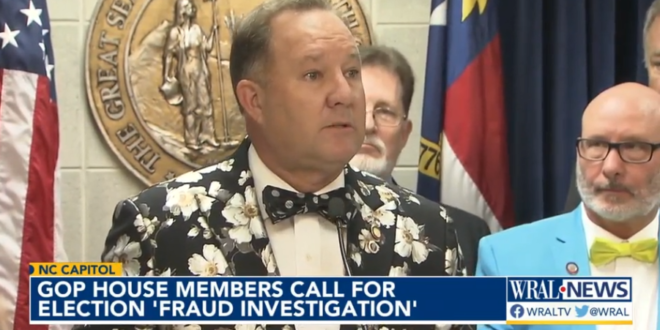 A group of Republican House members announced Thursday that they are launching a fraud investigation into North Carolina elections and said they would start by inspecting voting machines in Durham County, with or without the cooperation of state or county election officials. Rep. Jeff McNeely, R-Iredell, conducted a “random drawing” of a county name out of a hat, and Durham County was chosen. Perhaps coincidentally, Republicans have accused Durham County of voter fraud in the past.

Citing “many, many millions of accusations” of “machine tampering and votes being switched because of modems,” McNeely said at a news conference that lawmakers intend to see for themselves whether the machines have modems in them. Voting machines in North Carolina do not have modems and are not connected to the internet, by state law. McNeely brandished a roll of red evidence tape that he said would ensure voting machines at the Durham County Board of Elections office could be secured.

Previous Cultist AZ Rep: “We Don’t Know” Who Won Arizona
Next Study: Tens Of Thousands US Kids Orphaned By COVID