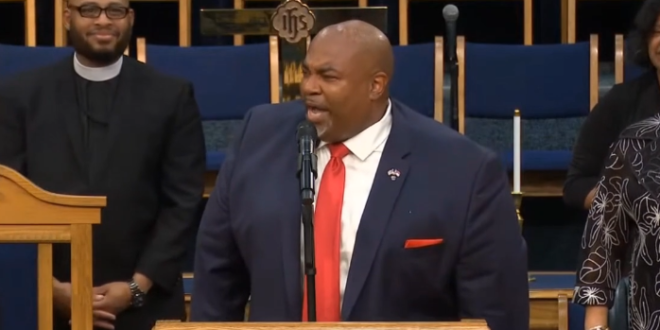 “Here’s something else I’m not supposed to say: Ain’t but two genders. You can go to the doctor and get cut up, you can go down to the dress shop and get made up, you can go down there and get drugged up, but at the end of the day, you are just a drugged-up, dressed-up, made-up, cut-up man or woman.

“We don’t even need science to prove what gender you are. There’s two ways I can do this thing here. The simple way is to go around the corner here to the bathroom and you can drop your pants or whatever you’ve got on, and I can show you what you are.

“It don’t matter what you did down there at the therapy doctor and all that.” – GOP North Carolina Lt. Gov. Mark Robinson, speaking at the church of anti-gay Pastor Patrick Wooden.
RELATED: Patrick Wooden, you may recall, once appeared on JMG for his claim that gay men have to wear diapers because they keep putting cell phones up their ass and then “birfing” them out of their “spinxters.” Wooden was one the architects of North Carolina’s infamous HB2. According to Wooden, God has “commanded” North Carolina to hate LGBT people.