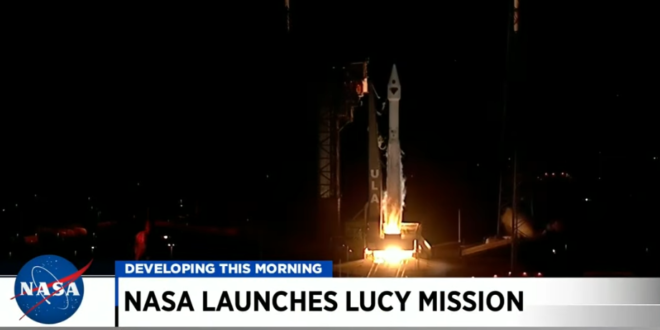 Via press release from NASA:

Over the next 12 years, Lucy will fly by one main-belt asteroid and seven Trojan asteroids, making it the agency’s first single spacecraft mission in history to explore so many different asteroids. Lucy will investigate these “fossils” of planetary formation up close during its journey.

“Lucy embodies NASA’s enduring quest to push out into the cosmos for the sake of exploration and science, to better understand the universe and our place within it,” said NASA Administrator Bill Nelson. “I can’t wait to see what mysteries the mission uncovers!”

About an hour after launch, Lucy separated from the second stage of the ULA Atlas V 401 rocket. Its two massive solar arrays, each nearly 24 feet (7.3 meters) wide, successfully unfurled about 30 minutes later and began charging the spacecraft’s batteries to power its subsystems.

Lucy sent its first signal to Earth from its own antenna to NASA’s Deep Space Network at 6:40 a.m. The spacecraft is now traveling at roughly 67,000 mph (108,000 kph) on a trajectory that will orbit the Sun and bring it back toward Earth in October 2022 for a gravity assist.

Named for the fossilized skeleton of one of our earliest known hominin ancestors, the Lucy mission will allow scientists to explore two swarms of Trojan asteroids that share an orbit around the Sun with Jupiter. Scientific evidence indicates that Trojan asteroids are remnants of the material that formed giant planets.

Studying them can reveal previously unknown information about their formation and our solar system’s evolution in the same way the fossilized skeleton of Lucy revolutionized our understanding of human evolution.

NASA is planning to launch a robotic archaeologist named Lucy on Saturday toward clusters of asteroids along Jupiter’s orbital path. They’re known as the Trojan swarms, and they represent the final unexplored regions of asteroids in the solar system. https://t.co/ZJu92Jt1Ak

“One of the beautiful pictures of Jupiter ever taken.”