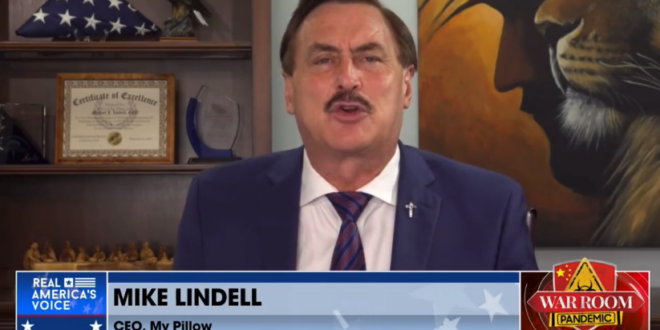 Mike Lindell: Cyber Ninjas Are “Part Of The Coverup”

Even though Lindell at one point believed the audit would pave the way for Trump’s “reinstatement” as president, he told Steve Bannon this week that the Arizona audit was seemingly part of an elaborate ruse.

Specifically, Lindell faulted Cyber Ninjas for writing a report of their findings without first obtaining routers used by Maricopa County during the 2020 election.

“We got to quit having them do fraudits — that’s fraudulent audits!’ Lindell fumed. “This is part of the coverup! Then the media goes, ‘Yep, look at that, Arizona, Biden won.’ No he didn’t! Donald Trump won Arizona by a quarter of a million votes! That’s fact!”

In a wild turn of events, MyPillow CEO Mike Lindell is now calling 2020 election audit efforts in Michigan, Idaho, and Arizona “fraudits.” “We gotta quit having them do ‘fraudits,’ fraudulent audits,” he stated. “This is part of the coverup!”