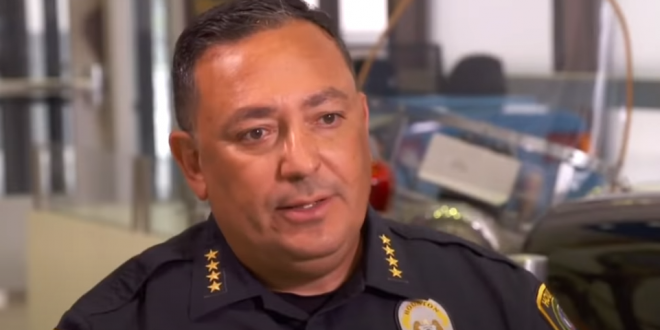 Miami City Manager Art Noriega moved to fire embattled Police Chief Art Acevedo Monday night, ending weeks of speculation following two circus-like public hearings where city commissioners slammed the chief for everything from a tone-deaf statement about “Cuban Mafia” running the department to a tight jumpsuit he wore years ago during a fundraiser in another city.

The suspension came three weeks after Acevedo inflamed a trio of the Cuban-American commissioner by accusing them of and comparing their actions to Communist Cuba. His short tenure has been filled with controversial decisions and gaffes like posing for a picture with one of the South Florida leaders of the white nationalist group the Proud Boys. Noriega released a statement early Monday evening saying the situation between Acevedo, 57, and the city had become “untenable.”

A lot of people in Chicago wanted Art Acevedo to apply for Police Superintendent before he left Houston for Miami. Now he’s being fired amid what can best be described as a shitshow. https://t.co/mvAZZHpkqw

Miami Police Chief Art Acevedo — who prides himself on working the street with beat cops — had two recent encounters with members of the right-wing extremist group the Proud Boys during the first demonstrations in the city in support of protesters in Cuba. https://t.co/e0iMeN1VeH