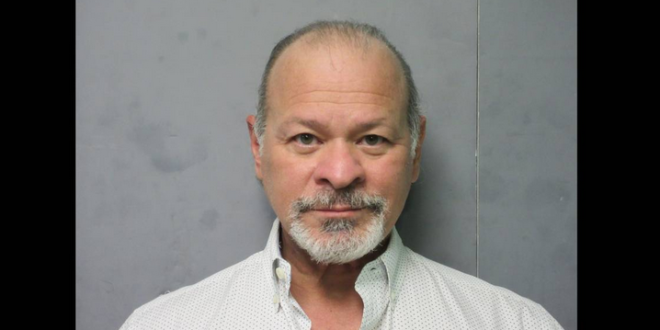 Frank Pichel, a controversial candidate for mayor of the city of Miami, was arrested by the Monroe County Sheriff’s Office early Friday morning on a felony charge of impersonating a police officer.

According to the sheriff’s office, he was booked into county jail at midnight. He was released about two hours later after posting a $5,000 bond. His attorney, Matthew Baldwin, was not immediately available for comment.

Pichel, 59, is accused of flashing a badge and claiming to be a Monroe deputy while he was sitting in a parked in a BMW in front of a house in a Key Largo subdivision May 30. Pichel, who is a licensed private investigator, is challenging Miami Mayor Francis Suarez in the November election.

Pichel was suspended from the MPD in 2000 after being accused of telling a public service aide to falsify a police report to cover for a fellow officer who battered a handcuffed prisoner who died a week later in a jail cell. He was never charged.

Eight years later, while working as a sergeant-at-arms at City Hall, he was accused of selling steroids and the erectile dysfunction drug, Cialis. As part of his plea deal, Pichel relinquished his police certification.

Miami mayoral candidate and ex-cop once arrested for selling steroids and Cialis who harassed a local business with Commissioner @JoeCarolloNow while collecting $5,000/month public pension is now wanted on felony charge of impersonating a cop #BecauseMiami https://t.co/oGJ8nG4qAh

NEW: Frank Pichel, a controversial candidate for mayor of the city of Miami, was arrested by the Monroe County Sheriff’s Office early Friday morning on a felony charge of impersonating a police officer. https://t.co/9H9KpepP9V pic.twitter.com/5icav0vsFf

Previous California First State To Mandate Vax For All Students
Next BOOK: Trump’s WH Was Like A “Clown Car On Fire Driving Full Speed Into A Warehouse Full Of Fireworks”