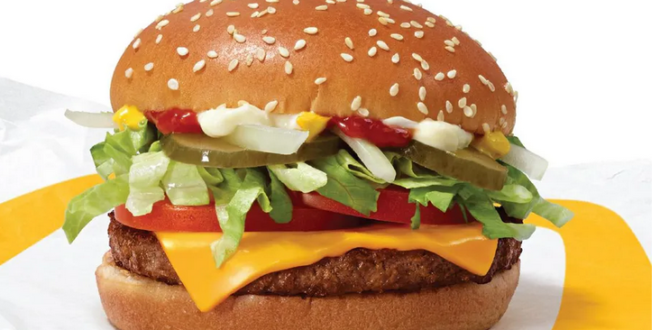 McDonald’s will offer its first vegetarian option in the U.S. next month, taking its new McPlant meatless burger for a test drive on U.S. menus, the fast-food giant announced Thursday.

“Eight McDonald’s restaurants across the U.S. will be testing the McPlant for a limited time starting Nov. 3 while supplies last,” McDonald’s said in the announcement. The test locations are spread out among seven cities and four states.

The McPlant patty is made of “plant-based ingredients like peas, rice and potatoes” and is co-developed with Beyond Meat, maker of the Beyond Burger and other meat-mimicking products such as plant-based sausage and chicken, McDonald’s said.

Read the full article. The item was also launched across Britain earlier this week.

That’s right, the #McPlant is here! Available in 250+ restaurants from today and nationwide from January 🌱

Can confidently say the #McPlant is one of the best vegan dupes ever. What a day to be alive. Thank you @McDonaldsUK 👏🏼 finally 😍🍔🍟 next, get the vegan nuggets on the go? pic.twitter.com/NkwAejptr1