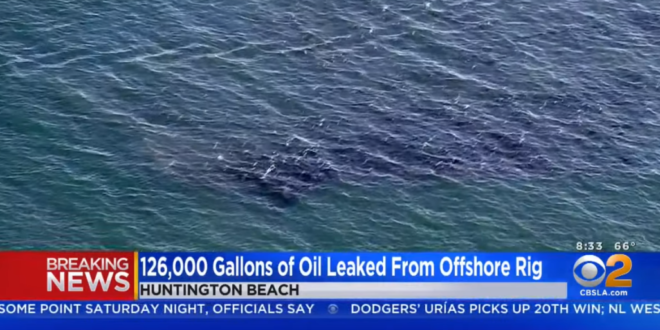 The oil slick, first reported Saturday, originated from a broken pipeline less than three miles off the coast of Huntington Beach connected to an offshore oil platform known as Elly. The rupture has poured more than 126,000 gallons of crude into coastal waters and seeped into the Talbert Marsh, officials said.

By sunrise Sunday, oil had washed ashore in Huntington Beach with slicks visible in the ocean, prompting officials to close a stretch of sand from the pier to the Newport Beach city line. Dead birds and fish had begun to wash up on the shore, officials said.

Dead birds and fish are washing up along the Southern California coast after roughly 126,000 gallons of post-production crude spilled Saturday https://t.co/SIxnNe2QXp

Breaking News: Dead fish and birds are washing up on the coast of Orange County, California, after a pipeline failure on Saturday caused at least 126,000 gallons of oil to spill into the Pacific Ocean, creating a 13-square-mile slick that’s still growing. https://t.co/rgDqx6Ithg

A major oil spill off the coast of Southern California has forced Huntington Beach and activities scheduled to take place in the region to shut down. https://t.co/7PWjuuUboA

In order to facilitate clean-up efforts, and given the potential health impacts, the decision has been made to cancel the final day of the Pacific Airshow due to yesterday’s oil spill. We apologize for the inconvenience and thank you in advance for your understanding. pic.twitter.com/RYr796SZ3r

Beach closed in #HuntingtonBeach due to massive oil spill. The @PAC_AIR show has been canceled. Stay tuned to @ABC7 for the latest updates. pic.twitter.com/ulmyU9NdjM