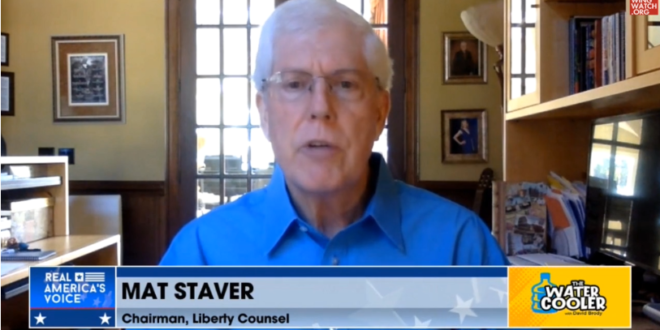 Liberty Counsel: Military Members Will Kill Themselves Over Vaccine Mandates Rather Than “Sin Against God”

We have noted before that the COVID-19 pandemic has turned religious-right activist Mat Staver of Liberty Counsel into a hard-line anti-vaccine activist, and every development in the fight to control the spread of the virus only seems to send Staver further off the rails.

On Monday, Staver appeared on “The Water Cooler,” a program hosted by religious-right political analyst David Brody on the Real America’s Voice network, where Staver likened the vaccine mandate imposed by the U.S. military to “rape” and warned that it will result in anti-vaccine soldiers taking their own lives rather than risk “sinning against God” by taking the vaccine.

“The pressure on that side versus the pressure of violating their conscience and sinning against God is unbearable, and there’s no question, they say, people will end up taking their lives under this pressure.”

RELATED: Staver has claimed that vaccine mandates may cause plane crashes. He also claims that the COVID vaccine causes miscarriages, sterility, brain damage, and is intended to “stop procreation.” On a July podcast, Staver’s guest declared that that vaccine contains graphene oxide with the intent of “linking people to the internet.” According to Staver, world health authorities, including the US federal government, are colluding with “Big Pharma” to hide the cure for COVID. Staver recently appeared on JMG when he falsely claimed that Biden has “exempted” members of Congress from his vaccine mandate. In fact, no president has the power to mandate anything for the legislative branch. The Liberty Council last week sued the Pentagon over its vaccine mandate.