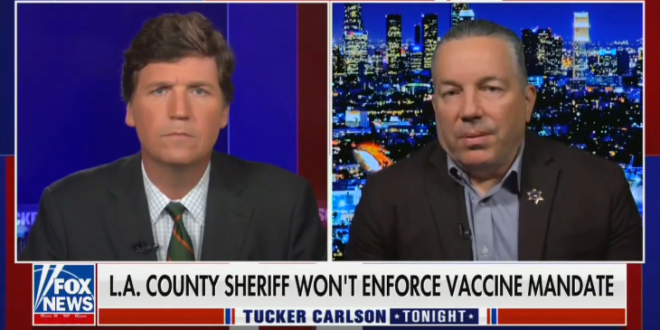 Los Angeles County Sheriff Alex Villanueva spoke with Tucker Carlson Tuesday night about his decision not to enforce the vaccine mandate. He told Carlson, “I believe in the vaccine, I believe in the science, but if someone else who is an employee does not believe in that, who am I to impose on them my belief system?”

Villanueva accused the Board of Supervisors of “embracing this woke alternate universe” where they “send off edicts like Moses coming down from the mountains.” Carlson ended the interview by telling him, “I hope you run for office.”

Previous Report: GOP Rep Spent $100K On Her Own Companies
Next Rioter Representing Himself Admits To Two Felonies