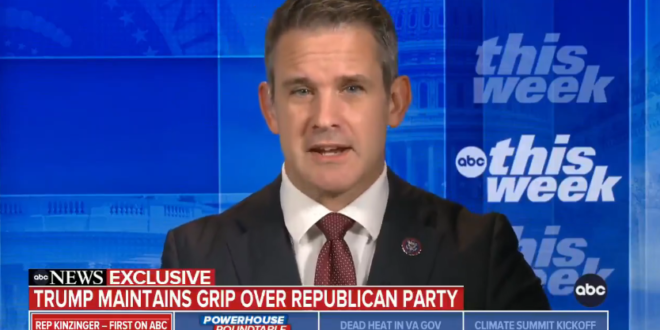 Kinzinger: The GOP Has A “Cancer Of Dishonesty”

When asked by host George Stephanopoulos on ABC’s “This Week” if his retirement announcement handed Trump a win, Kinzinger said it “potentially” did, before criticizing Republicans who have “put their head in the sand.”

“It’s not really handing a win as much to Donald Trump as it is to the cancerous kind of lie and conspiracy not just wing anymore, but mainstream argument of the Republican Party,” Kinzinger said.

“This is not on the 10 of us that voted to impeach, it’s not on Liz Cheney and I to save the Republican Party. It’s on 190 Republicans who haven’t said a damn word about it, and they put their head in the sand and hope somebody else comes along and does something,” he added.

Trust me, I’m not going anywhere. This isn’t resignation, concession, or giving up. I still have more than one year of my term and will continue to be a forceful voice — including on the 1/6 Committee. This is just the beginning, not the end! Must see: https://t.co/2fyVSBYaF2 pic.twitter.com/eoFtkZ7QWj

Asked by @GStephanopoulos if leaving Congress is handing a “win” to former Pres. Trump, @RepKinzinger slams Republican establishment for continuing to “breathe life” into Trump.

“It’s not on Liz Cheney and I to save the Republican Party.” https://t.co/m1EXzEtgku pic.twitter.com/GQJwPOtAyV

“You can fight against the cancer in the Republican Party of lies of conspiracy of dishonest. And you ultimately come to the realization that, basically, it’s me, Liz Cheney and a few others that are telling the truth,” @RepKinzinger says. https://t.co/oJd7pY8Ezz pic.twitter.com/6RAryJNXIB

After announcing he will not run for reelection, @RepKinzinger tells @GStephanopoulos that he hasn’t seen “any momentum” in the Republican Party to “move away from lies and towards truth.” https://t.co/36FQgG1T47 pic.twitter.com/B6hidbd4Zn