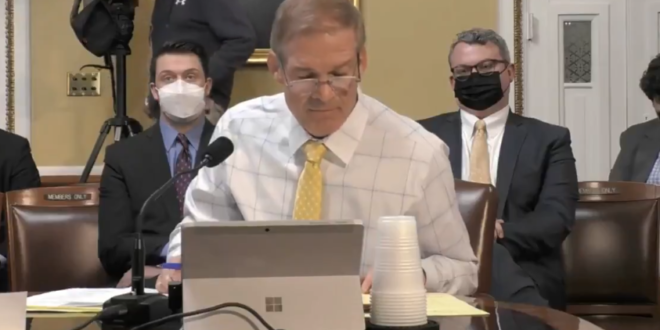 Jordan Changes His Story About Riot Calls With Trump

“I talked to the president after the attack. I’ve been clear about that,” Jordan told the House Rules Committee while testifying against a resolution to hold Steve Bannon in contempt of Congress.

Jordan said he “did not speak to the president during the attack,” though minutes later conceded that he “may have talked to him before, I don’t know.”

Jordan told Politico in August he spoke to Trump “more than once” on Jan. 6 and that he was “sure” one of those calls took place while he and other lawmakers were huddling in a safe room. “I had nothing to do with any of this,” Jordan said on Wednesday.

Rep. Liz Cheney (Wyo.), one of the two Republicans whom House Speaker Nancy Pelosi (D-Calif.) has appointed to the select committee investigating the Jan. 6 assault on the Capitol by a pro-Trump mob, has previously suggested that Jordan could be summoned as a material witness as the panel’s investigation proceeds.

“He’s somebody who was involved in a number of meetings in the lead-up to what happened on January 6th, involved in planning for January 6th, certainly for the objections that day as he said publicly, so he may well be a material witness,” Cheney said in July during an interview with ABC’s “Good Morning America.”

In the months since the attack, Jordan has given conflicting answers as to his communications with Trump that day.

Rep. Jim Jordan (R-OH), who previously said he didn’t know if he spoke with President Trump before, during, or after the 1/6 insurrection:

“No, I did not speak to the president during the attack.” pic.twitter.com/42VsgmY0t5