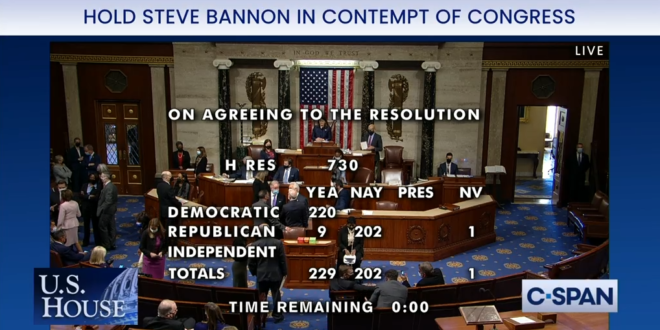 The House of Representatives voted Thursday to hold Steve Bannon in criminal contempt of Congress, recommending that he be prosecuted by the Justice Department for refusing to comply with a subpoena from the committee investigating the January 6 attack on the U.S. Capitol. The committee issued subpoenas to Bannon and several other former advisers of Donald Trump in September, seeking their testimony and records concerning the act of insurrection.

The letter sent to Bannon said that the committee has reason to believe Bannon has documents that are pertinent to its investigation, citing communications that Bannon had with Trump a week prior to the attack. Bannon refused to obey the subpoena for a deposition scheduled for October 14, with his lawyer citing Trump’s lawsuit to block the subpoenas, which invoked executive privilege.

NEW: GOP Rep. Adam Kinzinger: “Steve Bannon went out of his way to earn this resolution before us and now we must approve it.” https://t.co/WUVDuatqDl pic.twitter.com/AOyzZPeEBp

.@RepLizCheney on holding Bannon in contempt of Congress: “There’s a moment when politics must stop if we want to defend and protect our institutions.” pic.twitter.com/vzFnOIxGdS

Banks says Steve Bannon(who is claiming privilege) was a private citizen before, after, and during January 6th pic.twitter.com/t9F7yZjxSw

Every GOP House member who voted no on the Bannon contempt resolution is aligned with terrorists who sought to overthrow the United States government.

Listen to Steve Bannon talking about #January6th. The American people deserve to hear his testimony. pic.twitter.com/JDnotq5eDr

Why are we on the floor of the House of Representatives listening to the Democrats, socialists, and their Republican puppets reviewing Steve Bannon’s podcast?

Democrats can’t Build Back Better, so they’ve decided to Build Back Meaner. pic.twitter.com/dvwAa7fOsd

“We are investigating the attack on American democracy because we are Americans,” Rep. Raskin says as the House debates Steve Bannon contempt resolution.

“You cannot blow off a subpoena in America.” pic.twitter.com/BJFo6TDBzZ

Up to federal prosecutors now