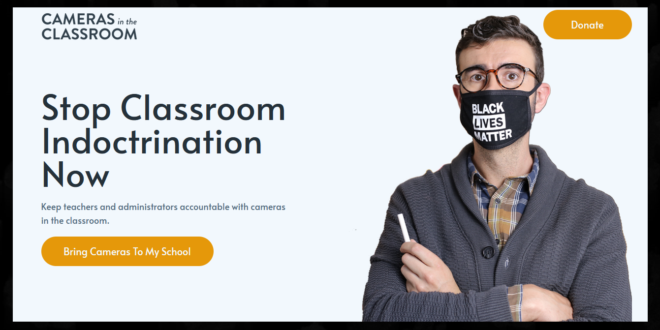 As education throughout the United States suffers the effects of an increasing ideological and cultural divide, more parents, students and educators are calling for a simple, technological fix: cameras in the classroom.

“This is not only a call for transparency in what is being presented to our children, we believe it is a valuable tool for creating a safer learning environment. Cameras in every classroom will help restore the cooperative process between parents and educators in teaching our children,” said Karen England, Executive Director of CRI.

Prior to remote learning being forced on so many students to comply with COVID stay at home orders, parents had little direct knowledge of the day-to-day happenings in their children’s schools. “But all that changed in 2020,” England explained. “Home computers became windows into the classroom.”

As parents watched over the shoulder of their kids, they noted that daily lessons often went beyond basic education and crossed the line into indoctrination. Time devoted to core subjects gave way to controversial interpretations of history, novel understanding of biology, and an aggressive promotion of sexuality.

Parents reacted to schools going off track by demanding that teachers stick to the basics. But educators, their unions, politicians and even the Department of Justice have pushed back.

Earlier this month, the US Attorney General chose sides calling on the FBI to address “the rise in criminal conduct directed toward school personnel.”

This followed a September 29 letter to President Biden from the National School Boards Association that painted a picture of school board members and educators cowering in fear of parents that were questioning their recent activities.

Condemnation of this overreach and clear attempt to stifle protected speech by the federal government has been swift and harsh.

“Teachers are not artists or entrepreneurs that are compensated to offer their own curricula and present ‘their truth.’ And school board members are not snowflakes that need to retreat to safe spaces away from those that disagree with them,” said England.

“Parents entrust their children to educators expecting that they will nurture and educate them, not undermine and contradict lessons taught at home.”

Karen England has appeared on JMG many times going back to 2009 for campaigns against the anti-bullying Day Of Silence, against the repeal of Don’t Ask, Don’t Tell, for an attempt to repeal the California Students Civil Rights Act, and for a slew of anti-trans actions. In 2010, she ran for California lieutenant governor, finishing in last place with 0.36% of the vote. Tucker Carlson endorsed her “cameras” plan in July.

Hate Group Calls For Teachers To Wear Body Cameras So They Won’t Be Tempted To “Promote Social Justice” – https://t.co/kf0M9nAVxl pic.twitter.com/8EwD7I7O0C