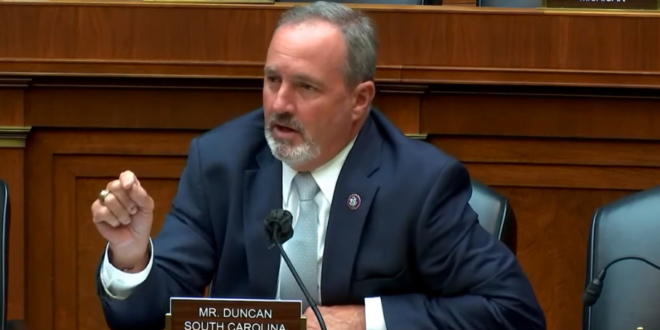 U.S. Rep. Jeff Duncan, who annually hosts a “Faith and Freedom BBQ” event in Anderson, reportedly donned a mask mocking President Joe Biden with a vulgar meaning in the nation’s capital Monday. Duncan walked off the floor of the House wearing a “Let’s Go Brandon” mask.

In his Twitter biography, Duncan calls himself a “Christian, husband, father and small business owner.”

The phrase has turned into a viral meme stemming from a sports reporter’s interview with NASCAR racer Brandon Brown. During the on-camera interview, a crowd of fans began chanting “F— Joe Biden,” though the NBC reporter claimed on camera the chant was “Let’s go Brandon.”

Duncan last appeared on JMG when he introduced a bill that would ban US embassies from flying the rainbow flag. He is also among the right wingers who falsely claim to have First Amendment rights on social media platforms. Duncan was among the many GOP reps who voted to overturn the result of the 2020 election.

Spotted at House votes: GOP Rep. Jeff Duncan of SC wearing a mask with a phrase that Republicans are using in place of F*** Joe Biden. pic.twitter.com/0rTSz6LwNV