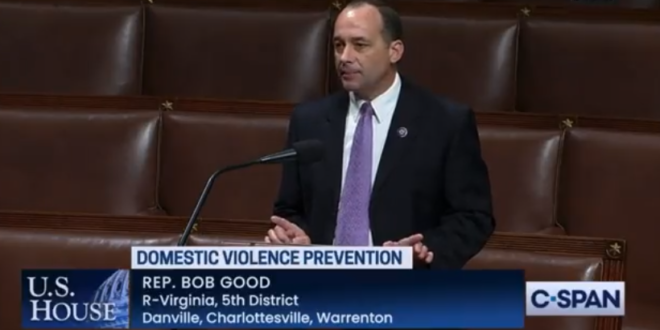 “My colleagues on the other side claim they want to protect the family. But instead they’ve chosen to attack the very bedrock of our country, the moral principles and the traditional family that hold our families and communities together.

“In fact, nearly everything that plagues our society can be attributed to a failure to follow God’s laws for morality and his rules for and definition of marriage and family.

“Violence is already illegal. We Republicans are against it in all forms. This is a matter for local law enforcement, and I urge my colleagues to vote against it.” – Virginia GOP Rep. Bob Good, in a House floor speech today.

Last year Good defeated incumbent GOP Rep. Denver Riggleman in a primary campaign that centered around attacking Riggleman for having officiated the same-sex marriage of a former campaign volunteer.

Good is a loud proponent of Trump’s Big Lie, says the COVID pandemic is “phony,” and has appeared at a rally organized by a far-right militia group.

On January 6th, Good voted against certifying the result of the 2020 presidential election and later was among the 16 GOP House reps who voted against Congressional Gold Medals for Capitol Police officers.

GOP Rep. Blames Society’s Problems on ‘Failure To Follow God’s Laws for Morality and His Rules For, and Definition Of, Marriage’ https://t.co/2b1b9NmqnN

This is especially ironic since Bob Good previously worked as a fundraiser for Liberty University’s athletics program.

That’s Liberty U., the school known for following God’s rules… and for repeatedly ignoring/dismissing claims of sexual assault by female students. https://t.co/KRrYTeIAoZ