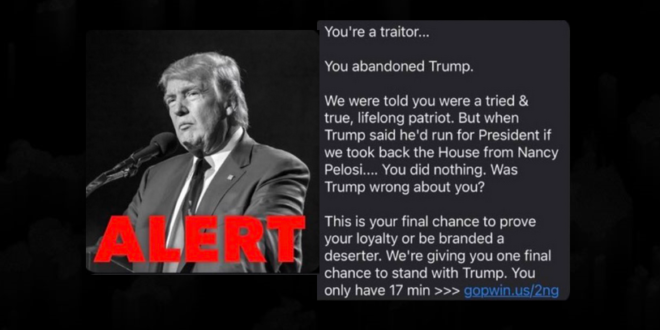 But it’s totally not a cult:

A fuming fundraising text from the National Republican Congressional Committee (NRCC) has angered Trump-supporting conservatives after it called them “traitors” for not donating enough money to the GOP. “You’re a traitor,” the NRCC boomed in a mass text, presented as a message against supporters who had “abandoned” him.

The message, which was shared widely on social media, lambasted its recipients for doing “nothing” to help the Republican Party regain the House of Representatives and questioned whether Trump was “wrong” about them, before warning, “This is your final chance to prove your loyalty or be branded a deserter.”

These NRCC fundraising texts are getting intense pic.twitter.com/2Smm3NXCYy

I’m sure it’s fine guys. Don’t change a thing Tom! YOU CAN DO IT! https://t.co/7nfXspjenJ

Pretty wild to think about. @nrcc has $65 million on hand right now, as we reported this AM in @PunchbowlNews

Limits have changed, but wild to think about how much the game has changed

“He’s a private citizen and he’s entitled to his own opinion,” says NRCC chairman Tom Emmer when asked about Trump’s continued focus on the 2020 election and potential distracting effects on the 2022 midterms.

This is a crime boss message. In #Strongmen I talk about the overlap between authoritarianism and criminality. https://t.co/ruRgWn7AbY