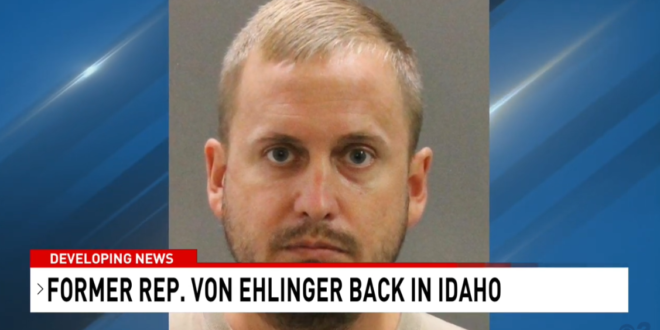 The Ada County Sheriff’s Office arrested former Idaho Rep. Aaron von Ehlinger on Friday afternoon after he was extradited from Georgia to his home state. Ada County deputies flew to Georgia on Thursday afternoon and returned to Boise the next day with von Ehlinger in custody. He was processed under a “book-and-release” warrant and was released from the jail Friday with no bond, Sheriff’s Office spokesperson Patrick Orr said.

Von Ehlinger, originally from Juliaetta, has been charged with two felonies: rape and forcible penetration by use of a foreign object. The charges stem from an incident that took place with a 19-year-old woman who worked at the Statehouse during the legislative session. She filed a complaint with the Boise Police Department alleging that he forced her to perform oral sex on him in March.

Jon Cox, von Ehlinger’s attorney, said his client was taking a vacation with family in Central America and tending to some “business interests,” adding that he was unsure which country the former lawmaker had traveled to. But the defense attorney was adamant that von Ehlinger was not a “fugitive” and was not trying to avoid prosecution by leaving the U.S. while the rape investigation was going on.

Von Ehlinger resigned from the Idaho Legislature in April as the House prepared to vote on whether to expel him. Hours before his resignation, a bipartisan legislative ethics committee had voted unanimously to find that the lawmaker had committed “conduct unbecoming a representative” in his sexual pursuit of multiple women who worked at the Idaho Capitol, including a teenage intern, who told police von Ehlinger had raped her in his apartment.

Von Ehlinger was appointed to the state legislature by GOP Gov. Brad Little last year following the death of the rep for that district. He served less than 10 months before the alleged rape.