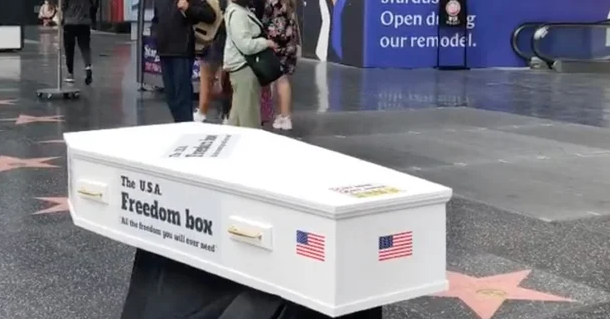 An artist has made a grim addition to former President Trump’s Hollywood Walk of Fame star, installing a coffin that he says is in protest of those who oppose face masks and COVID-19 vaccines. The life-sized white coffin from Plastic Jesus, a Los Angeles-based street artist, could be seen Thursday on Trump’s marker.

“On the side it’s got the ‘USA Freedom Box,'” the artist said in an interview posted on Twitter. “I wanted to do something because the anti-mask, anti-vaccine, anti-science mob has become so vocal,” the British-born self-described “provocateur” said.

“Freedom Box” by street artist @PlasticJesus9, has been left in front of former President Donald Trump’s star on the Hollywood Walk Of Fame (the “freedom” Trump advocated to die from COVID-19). pic.twitter.com/JneLMx01fn