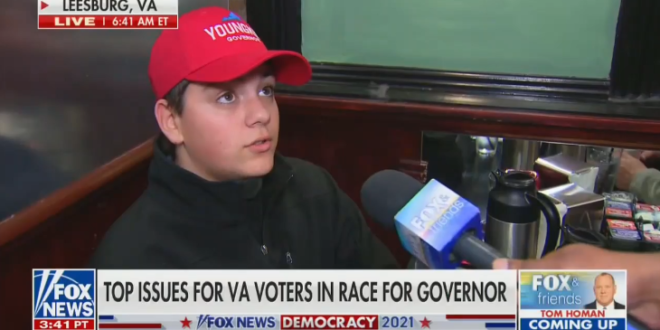 Fox News host Lawrence Jones reported from a Leesburg, Virginia diner Thursday morning, and broke major news when he came across a student who revealed — live on camera — that he felt “attacked” by “woke teachers” who showed him “degrading” videos.

In what is a remarkable coincidence, the student in question, William Shultz, is the son of Elizabeth Shultz, who is a former school board member in Fairfax County, a GOP activist, and has appeared on Fox News before to explain an op-ed she wrote complaining about critical race theory being taught in schools.

At no time in the segment did Jones disclose that Elizbeth Shultz is a political activist and so Fox & Friends viewers were likely left with the impression that she and her son’s reaction is just standard fare for Virginia diners.

Fox & Friends Diner Subject — And Son of a GOP Activist — Claims He Was Attacked by ‘Woke’ School Videos https://t.co/OOXB24xGSg

Fox & Friends ran a segment in which a network correspondent was meeting with supposedly regular people at a diner — but it was actually a choreographed campaign stop with a defeated local politician who later became a Trump Education Department official https://t.co/QGiZcm2tgw pic.twitter.com/qTH2oWgmtL

Previous DeSantis Calls For Special Session To Block Mandates
Next CA Sec Of State Candidate: I Repelled A Killer In Jesus’ Name And Sent Him To Murder The Witches Next Door