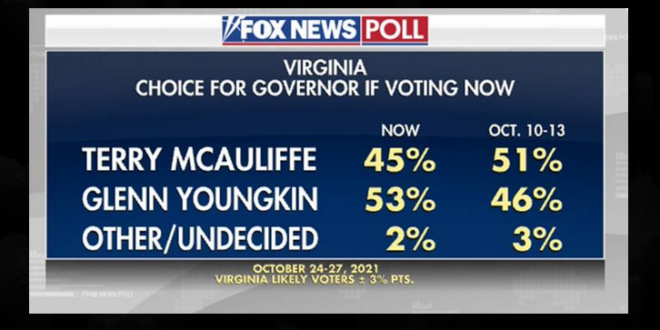 The high-stakes Virginia gubernatorial race between Democrat Terry McAuliffe and Republican Glenn Youngkin has been narrowing in recent weeks, and now it couldn’t get much tighter.

After a Fox News poll on Thursday gave Youngkin an 8 percentage point likely-voter lead over McAuliffe — versus McAuliffe’s 5-point lead in the same poll two weeks ago — the two candidates are now tied at 47.1 percent each in the FiveThirtyEight polling average.

Youngking has a 0.4-point lead in the RealClearPolitics average. “What changed? GOP enthusiasm,” Fox News explains.

In just two weeks he’s flipped a 5 point deficit into an 8 point lead. It’s just one poll, but Fox News use good pollsters and this is a big move. pic.twitter.com/bL7J77JRyA