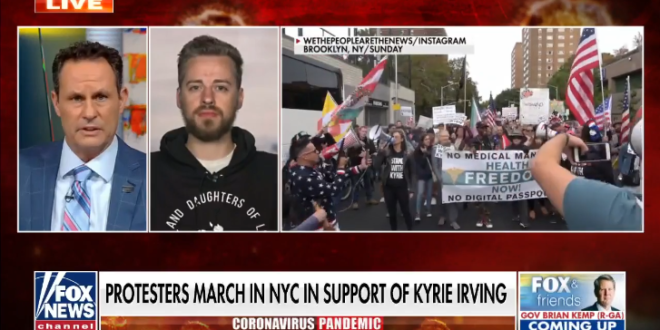 After an anti-vaccine mob attempted to storm into the Barclays Center basketball arena in New York over the weekend in support of benched Brooklyn Nets player Kyrie Irving for his refusal to take the COVID-19 vaccines, Fox News gave the story positive coverage Monday morning — despite the obvious fact that such militant defiance of pandemic health measures would not be welcomed within Fox’s own walls.

“There’s so many great people who feel the same way about the vaccine, on all different education, all different backgrounds; they just are not being listened to,” Fox & Friends co-host Brian Kilmeade told rally organizer John Matland. “John, thanks for standing up, appreciate what you’re doing.”

Kilmeade also has a long history of comparing any protesters he doesn’t like to terrorists, while he has also supported far-right militants — though he did add later in Monday’s program that the crowd in Brooklyn “got a little overzealous and tried to storm the gates, which I’m not in support of.”

Read the full article. As the linked article notes, organizers of the mob claim the rally took place in “partnership” with Black Lives Matter, but in fact the person they cite has been condemned by BLM leadership as a militant who is exploiting them by using their name.