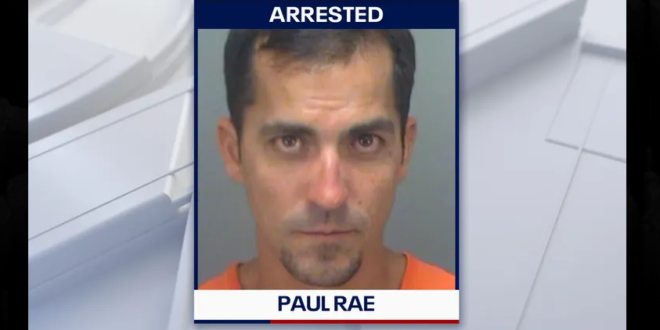 Deputies assigned to the Marine Unit and DUI Unit investigated an overnight boating crash that resulted in the arrest of 38-year-old Paul Rae. Rae is currently on federal supervised release status due to his indictment in the January 6, 2021 incident at the US Capitol.

On October 2, 2021 at approximately 10:00 p.m., deputies assigned to the Marine Unit responded to a small island in the intercostal waterway near 794 182nd Avenue East. Multiple witnesses reported the crash after the vessel was traveling northbound at high speed.

The vessel ran aground on the small island and deputies located it approximately 75 feet from the water line. Also located on the island were Rae and his passenger, both uninjured and showing signs of impairment.

Deputies assigned to the DUI Unit conducted a BUI investigation and Rae showed several indicators of impairment. Rae was arrested and taken to the Pinellas County Jail where he was booked on one count of Boating under the Influence.

Rae was released from jail on his own recognizance shortly after 9:00 a.m. The boat, which remained grounded overnight, will be removed from the island by a tow boat company this morning.

Paul Rae and his passenger were found on an island, both uninjured but showing signs of impairment. https://t.co/3zO9mUDogU

*Another Florida man, Paul Rae of Largo, has been charged in the Capitol riot.
*Linked to Proud Boys.
*In search, agents found 7 firearms, 1,000 rounds of ammunition.
*Face heavy charges, including obstructing Congress.
*Free on bond; must surrender guns.https://t.co/9i8UfqS9Gj pic.twitter.com/3D9PBMf2BV

JUST IN: The feds have charged another Proud Boy for entering the Capitol. Paul RAE entered the building alongside Joseph Biggs and exchanged a phone call with him while inside, prosecutors say. https://t.co/ZZLInpC7Dm pic.twitter.com/CHFmDy6cYQ