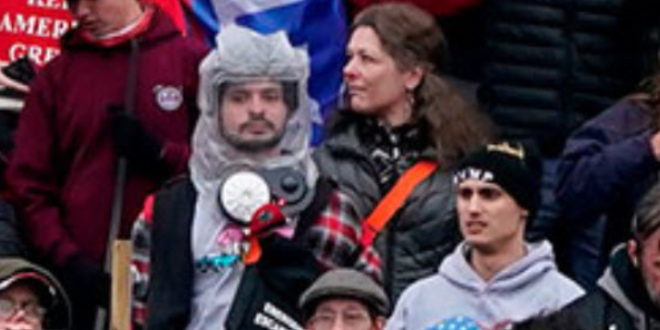 The FBI has arrested a mother-and-son duo accused of entering House Speaker Nancy Pelosi’s office during the Jan. 6 attack at the U.S. Capitol after the pair were successfully identified by online sleuths.

The two arrestees ― whom online sleuths working under the #SeditionHunters moniker nicknamed “AirheadLady” and “AirheadBoy” because the pair emerged from the Capitol wearing stolen emergency escape hoods ― will face a host of federal charges.

A mother-and-son team dubbed “Airheads” by internet sleuths stormed House Speaker Nancy Pelosi’s office, and the mom admitted to federal authorities that she helped a man steal a laptop there, according to court papers unsealed on Friday.

“In an approximately 5-second video recorded by a bystander from inside the Speaker’s office conference room, an individual’s arm is shown reaching from outside the frame of the recording toward a laptop and gloves that are sitting on a conference table,” according to the 9-page affidavit.

“The individual consistent with images of MARYANN MOONEY-RONDON captured in CCTV surveillance footage. In the bystander video, a female voice states, ‘Dude, put on gloves,’ while an unidentified male with his back turned to the camera then appears to use the gloves to lift the laptop from the table before the recording ends.”

BREAKING: The FBI has arrested a mother-and-son duo accused of entering House Speaker Nancy Pelosi’s office during the Jan. 6 attack at the U.S. Capitol after the pair were successfully identified by online sleuths. https://t.co/zIdFYviLK6

“RAFAEL RONDON told agents that he and his mother, MARYANN MOONEY-RONDON, rode the Metro into the District of Columbia on the morning of January 6, 2021, ‘because I’m not taking my car into the city which, the Capitol building I’m about to break into.’” pic.twitter.com/r0ZitSa4AL

MORE: Maryann Mooney-Rondon and her son, Rafael Rondon, were arrested today on multiple charges, including a felony theft charge for a laptop stolen from @SpeakerPelosi‘s conference room on January 6. #CapitolRiot @wusa9 https://t.co/D72CzW205X

SAC statement on the arrests of Watertown residents Rafael Rondon and Maryann Mooney-Rondon for their role in the U.S. Capitol riots on January 6, 2021. Rafael has also been indicted in @NDNYnews for possessing an unregistered sawed-off shotgun. @FBIWFO @USAO_DC pic.twitter.com/KQKbEc5SkR

As reported first by @ryanjreilly, the DOJ has unsealed a case against a New York mother and son, Maryann Mooney-Rondon and Rafael Rondon, including charges they stole a member of Congress’ escape hood (see below). Docs: https://t.co/QplDqtag0T #CapitolRiot @wusa9 @EricFlackTV pic.twitter.com/tdhs2uRsCT