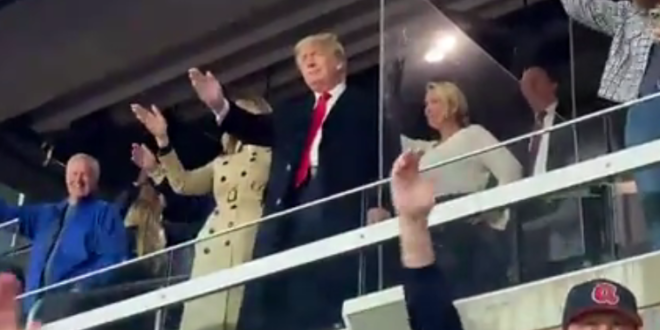 Famous Liar Lied About Being Invited To World Series

Before the World Series arrived in Atlanta, the Braves announced that former president Donald Trump would be attending Saturday night’s Game 4. Saturday afternoon,

just before 1:30 p.m. Eastern Time, Trump sent an email to his mailing list, which read, in full: “Looking forward to being at the World Series in Atlanta tonight. Thank you to the Commissioner of Baseball Rob Manfred, and Randy Levine of the great New York Yankees, for the invite. Melania and I are looking forward to a wonderful evening watching two great teams!”

However, MLB disputes Trump’s characterization of events. In a statement to Yahoo Sports’ Hannah Keyser, MLB officials indicated that Trump, as previously reported, had requested to attend the game.

Former President Donald Trump participated in the controversial “Tomahawk chop” at Game 4 of the World Series in Atlanta on Saturday night.

The chop, a stadium-wide chant and longtime tradition at Braves games, has been under renewed scrutiny as part of a national discussion about racism and racial imagery in professional sports. Several advocacy groups and observers have accused the chant of mocking Native American groups and decried it as racist.

Trump has frequently sought to capitalize politically on such controversies as part of an effort to galvanize the White voters who make up much of his political base.

Donald Trump is traveling to the World Series just so he can be filmed doing the tomahawk chop in Georgia with his fellow @Braves. But if you state the obvious: that this all carries the stench of a white supremacist photo op, you’re being divisive.

I love that the embarrassment of Melania rolling her eyes in disgust at their god Donald is going to interfere with the MAGA cult’s previous undiluted glee at her joining Donald in the racist tomahawk chop. https://t.co/NRZRY8fO5y

Per @Braves Trump is lying about being invited to the Series tonight.

More relevantly, the team CEO says they’re “open to anyone coming” and when he asked for tickets, they said yes.

Previous Southwest Sorry For Pilot’s Coded “F Biden” Message
Next Kinzinger: The GOP Has A “Cancer Of Dishonesty”