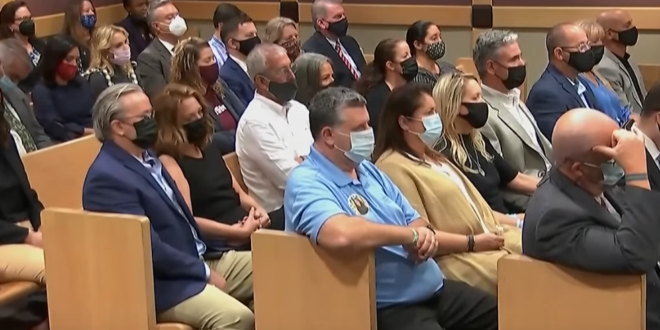 His guilt was never really in question. Now it’s official. Nikolas Cruz, the man who terrorized Marjory Stoneman Douglas High School just minutes before school let out on Valentine’s Day 2018 slouched before Broward Circuit Judge Elizabeth Scherer, flanked by his defense lawyers, and declared himself guilty, one by one, of 17 counts of murder and guilty of 17 counts of attempted murder.

“I accept your plea,” the judge said. The pleas came after the judge carefully went over the gunman’s rights under the law. “The maximum penalty is death,” she warned him, adding that the minimum sentence is life. “Do you understand?” “Yes,” he said. He wanted to say something to the families of the victims. Not yet, the judge said before listing the attempted murder victims.

The 34 guilty pleas were enumerated in a somber courtroom filled with the families of those who were killed and injured at Marjory Stoneman Douglas High School on Feb. 14, 2018. The community had braced for perhaps a monthslong trial but now soon faces what could be a grisly penalty phase as the state seeks to put the former student, Nikolas Cruz, to death.

Mr. Cruz, wearing a blue shirt under a black sweater vest, pleaded guilty after the judge read a lengthy list of questions about whether he understood the gravity of his plea and that it could lead to his death. He responded with “guilty” 34 times as Judge Elizabeth Scherer read each charge — including each victim’s name — and asked how he wanted to plea.

In the aftermath of the shooting, Parkland student activists formed March for Our Lives, a group that rallied hundreds of thousands around the country for tighter gun laws. In addition to a nationally televised march in Washington, D.C., parents also made impassioned pleas for accountability and policies aimed at halting gun violence.

In a statement, March for Our Lives said it had no comment on Cruz and said they would “never dignify him by referring to his name.”

But the group said: “A single guilty plea does not bring closure as long as it is still possible for another person anywhere in this country to be murdered by a gun at school, in a place of worship, or in their very own home.

Cruz’s defense team had long ago offered a guilty plea in exchange for life in prison without the possibility of parole — but only if prosecutors took the death penalty off the table. Prosecutors had rejected that, saying they were seeking the death penalty.

Death penalty trials are split into two distinct sections: the guilty phase and the penalty phase. The guilty plea would resolve the former phase but not the latter, and Cruz could still be sentenced to death.

On Thursday, the Broward State Attorney’s Office released a statement saying “there have been no plea negotiations with the prosecution,” and “if he pleads guilty, there would still be a penalty phase.”