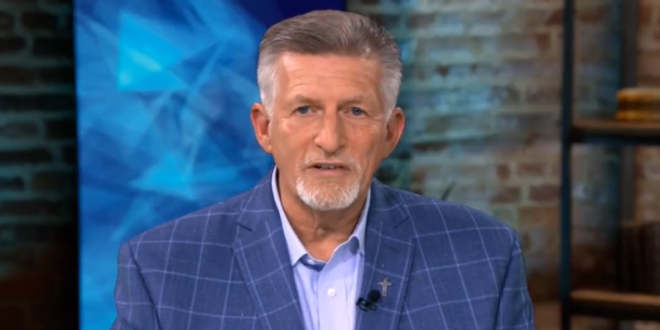 Extremist Pastor Rick Wiles: The Vaccine Contains “An Egg That Hatches Into A Synthetic Parasite” [VIDEO]

“They’re planting – they’re putting eggs in people’s bodies. If you didn’t see yesterday’s TruNews, you need to watch it. It’s an egg that hatches into a synthetic parasite. It grows inside your body.

“This is like a sci-fi nightmare. And it’s happening in front of us. This is a global coup d’état by the most evil cabal of people on the planet in the history of mankind.

“And if it’s not stopped in the very near future, they will win. That’s what at stake. Control of the world.” – Pastor Rick Wiles, on today’s webcast.

Wiles was hospitalized with COVID early in the summer and claims that the “Chinese medical mafia” conspired to infect him because because he wants Fauci to be arrested.

That claim came three days after he declared that Satan had infected his entire crew because his then co-host Milo Yiannopoulus had supposedly become ex-gay.

Yiannopoulos later quit or got fired and denounced the show. At last check was working with the far-right Catholic Church Militant site, which is headed by comically bewigged ex-gay Michael Voris.

Wiles has celebrated that millions of “stupid people” will be killed in a “global genocide” due to the COVID vaccine, leaving only genuine Christians like himself.

End Times conspiracy theorist Rick Wiles claims that COVID-19 vaccines contain “an egg that hatches into a synthetic parasite and grows inside your body.” pic.twitter.com/mOUHaztXT0