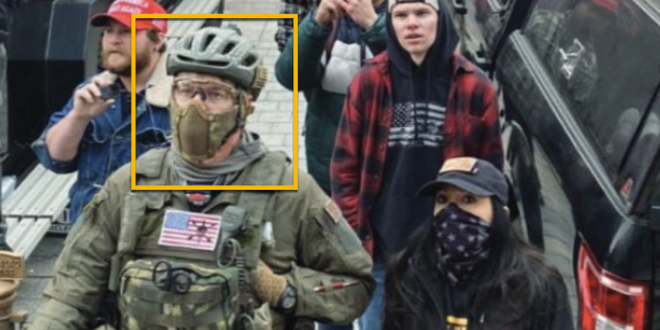 A former Florida candidate for Congress was arrested this week on charges related to the Jan. 6 riot at the U.S. Capitol. In probable cause documentation, the Department of Justice — citing video and photo evidence — accuses Jeremy Brown of being on Capitol grounds in full military apparel. He, too, is said to have carried surgical trauma shears, tactical gear and zip ties on his body.

According to the documents, the FBI received a complaint from a witness who knew Brown for several years. They provided publicly available photos of Brown in tactical gear a day before the riot but were unsure if he entered the Capitol during the riots. One of the photos, published by the news outlet Reuters, indicated Brown was a self-described member of the Oath Keepers extremist group.

“We have a RV an Van going,” he wrote in a message on Signal, the document says. “Plenty of Gun Ports left to fill. We can pick you up.” A witness who’s known Brown “for multiple years” came forward to the FBI to identify him.

The homocon fake news site Gateway Pundit claims Brown was only arrested because he refused to be an informant for the FBI. Site owner Jim Hoft is directing his readers to Brown’s money beg on the Christianist crowdfunding site GiveSendGo, where Brown is seeking $200,000 to fund a libel suit against the Washington Post. As of this writing, nearly $17,000 has been raised.

An ex Florida @GOP candidate for Congress, Jeremy Brown, was arrested on charges related to the Jan. 6 riot and charged with storming the Capitol in full military apparel, carrying surgical trauma shears, tactical gear and zip ties on his body. #Terrorist https://t.co/xoEaGrzcu2