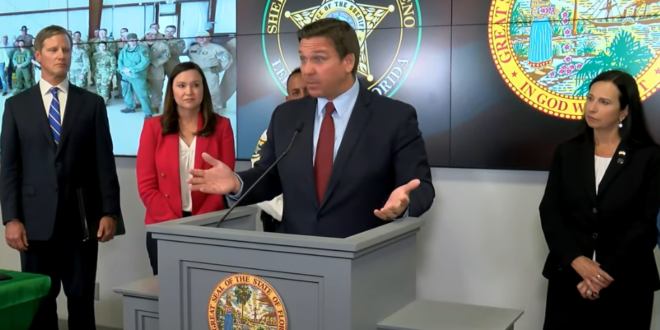 “I’m not considering anything beyond doing my job. We got a lot of stuff going on in Florida. I’m going to be running for reelection next year,” the Republican told Fox News host Sean Hannity. “We are also working on a lot of things in the state beyond the governor’s race. We got school-board races,” DeSantis added.

“I want to make sure people are not supporting critical race theory, making sure that parents have the ability to send their kid to school the way they want to.”

Under DeSantis, Florida banned the teaching of critical race theory in its public schools in June. Republican activists and lawmakers across the country baselessly insist that liberal school systems are teaching white American kids that they’re racist, and DeSantis has described CRT as the teaching of “false history” that would “denigrate the Founding Fathers.”

DeSantis told Sean Hannity that he’s not considering a presidential run in 2024, saying he’s focused on “stuff going on in Florida.”#DeathSantis https://t.co/8y1uwR3D8u

Hannity: Are you considering a run for president?

Ron DeSantis: “I’m not considering anything beyond doing my job… I want to make sure people are not supporting critical race theory.” pic.twitter.com/RX3RB9fB7d

Previous EXPERTS: AZ QAnon Outfit “Made Up The Numbers”
Next ND Gov Warns That Hospitals Are At “Redline Capacity”