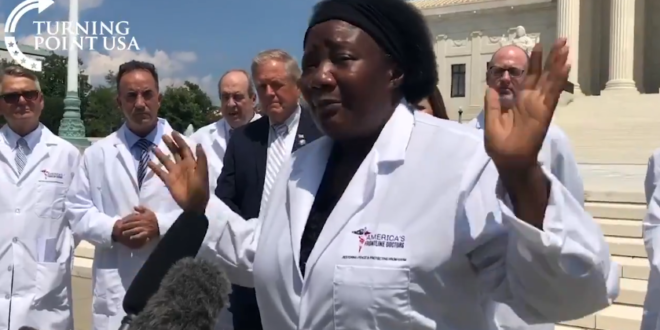 Demon Semen Doctor: Satan Has Sent Clones Who Will Murder Anybody Who Refuses The COVID Vax [VIDEO]

“The devil have power to give breath to the clones, to the images. We’re dealing with the number of the beast and the name of the beast. I don’t think the mark is right now.

“So these clones – the devil has power to give life, to these images – the clones, that will cause people in the hospitals to die.

“They will not give them medicine. They will make stupid laws. They will lock down cities, they will be make children get sacrificed.

“They will go to abortion clinics, they will make you rip out babies out of mothers at nine months. The evil that is going on is not human evil.

Stella Immanuel, one of the right’s leading anti-vaccine “experts,” claims that the devil has filled the world with clones who are now trying to kill all those who refuse to take the vaccine, which is a precursor to the Mark of the Beast. pic.twitter.com/EHpk1eLDZz

RELATED: Stew Peters recently earned national headlines when Delta Air Lines publicly denied a claim made on his show that a pilot had died mid-flight after receiving the COVID vaccine. Also recently it was revealed that Florida’s new surgeon general had appeared in an anti-vax video alongside Stella Immanuel, whose anti-mask claims were promoted on Twitter by Donald Trump, his son Junior, Charlie Kirk, and other prominent right wingers. Immanuel is best known (maybe until today) for claiming that ovarian cysts are caused by women having sex with demons in their dreams. She has also claimed that prominent government officials worldwide are in fact alien reptilians. Stella Immanuel’s main partner in founding America’s Frontline Doctors was arrested in the attack on the US Capitol.