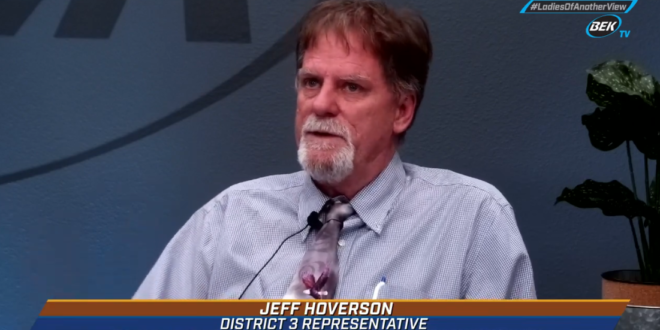 A North Dakota lawmaker was barred from boarding a flight at Minot International Airport Monday, following an incident with a TSA agent. Rep. Jeff Hoverson, R-Minot, said he and his wife were planning to travel Monday for their anniversary.

Hoverson told Your News Leader that a TSA agent who was giving him a pat down put his hand in the front pocket of Hoverson’s hoodie. Hoverson said the agent said in advance he was going to do so, but did not ask permission.

In a statement to Your News Leader, the TSA said a pat down was initiated when the passenger set off the alarm in the screening machine. The TSA said the passenger objected during the pat down and called the police, but eventually complied with the pat down, and the airline made the decision to deny boarding.

Read the full article. Per Wikipedia, Hoverson is a pastor with Living World Lutheran Church and operates an ice cream truck with his wife. Hoverson is an anti-vax, anti-mask acolyte of Mike Lindell.

The TSA said Rep. Jeff Hoverson, R-Minot, objected during the pat down and called the police, but eventually complied with the pat down, and the airline made the decision to deny boarding. https://t.co/XjkhBFgBKJ

With Oley Larsen, Jeff Hoverson, and Bob Paulson, District 3 will be a beacon of liberty for the state of North Dakota. Help support their campaign today. https://t.co/veOnbUwuA7 pic.twitter.com/hCSMNtbaAs

Rep. Jeff Hoverson pushed back on the idea of COVID-19 vaccine passports at Tuesday morning’s Ward County Commissioners meeting stating, “no government entity may mandate or coerce the COVID-19 or related vaccine in Ward County.” https://t.co/qrbJGFJzZI