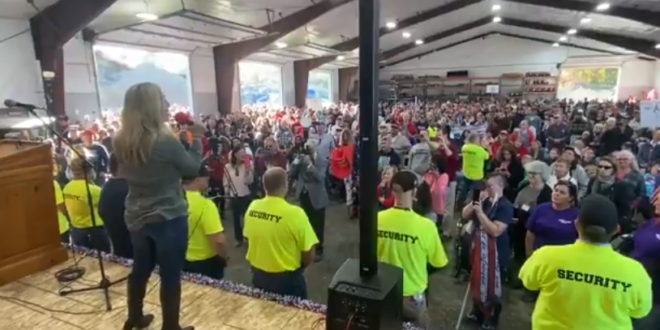 The America First Rally drew hundreds of people to Plainfield on Saturday. The event was hosted by the Quinebaug Citizens Alliance. Republican Congresswoman Marjorie Taylor Greene, of Georgia, was invited to speak.

“This is how you save your country!” Greene told the crowd. “You bring a bunch of great people together: people that love America, believe in our freedoms, believe in our Constitution, and are going to stand firm in the tyranny we’re facing right now.”

Greene has come under fire for endorsing conspiracy theories, including that the tragedy at Sandy Hook Elementary School was staged. She has since said she no longer believes that to be true.

Read the full article. In the clip below, Greene recounts, to wild applause, how she she has promised to “kick that bitch” Nancy Pelosi “out of Congress.”

This is the Republican Party now. pic.twitter.com/XNRws39J2a

Connecticut is better than bigotry and we WILL come together against what you stand for. Stay the hell out of our state you transphobic, Sandy Hook-denying conspiracy theorist. pic.twitter.com/JgyazXJOXD

At a rally in Plainfield, Marjorie Taylor Greene says she’s heard terrible things about Connecticut. “I heard it was filled with Democrats.” pic.twitter.com/fB2QMPJwCp

Previous CHATTER AWAY: Overnight Open Thread
Next Biden To Host Manchin Today To Hash Out Agenda