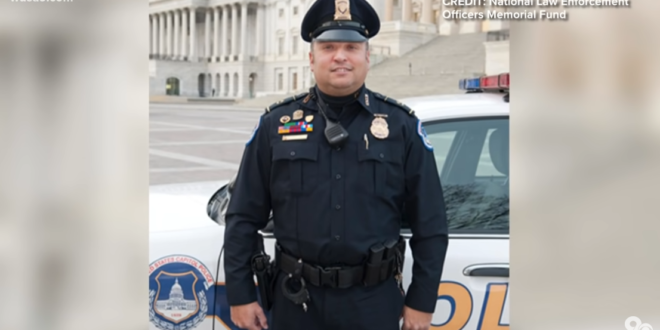 A U.S. Capitol Police officer pleaded not guilty to helping a Facebook friend scrub evidence of participation in the Jan. 6 siege of the complex he was sworn to defend.

Officer Michael Angelo Riley, who has more than 25 years of experience, allegedly helped a man he barely knew — known only as “Person 1” in his indictment but believed to be convicted U.S. Capitol stormer Jacob Hiles —delete his digital trail the day Jan. 6.

On the day of the breach, Riley responded to reports of an explosive device near the Capitol complex, prosecutors say. The day after, prosecutors claim, Riley sent a direct message to his Facebook friend warning him that posting escapades inside the Capitol was unwise.

⁦🚨BREAKING🚨 @CapitolPolice⁩ Officer Michael Angelo Riley pleads NOT GUILTY to 2 counts of obstruction for his role helping a friend cover up for his actions on January 6 #CapitolRiot ⁦@wusa9⁩ https://t.co/IyrHH136eh

Previous Trump: Junior “Couldn’t Be Beaten” In Run For Office
Next Hate Group Launches National Push For “Cameras In The Classroom” To Monitor For Social Justice Lessons