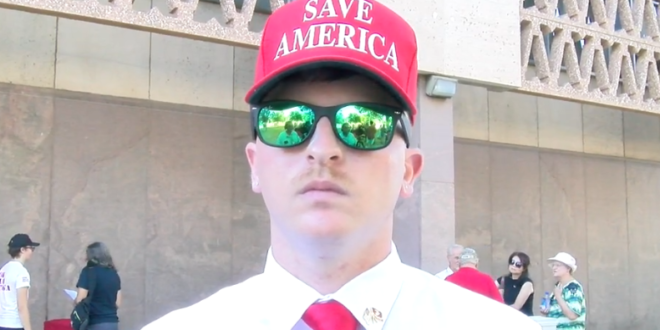 An Arizona political commentator charged in the US Capitol riot spoke at a small right-wing rally in Phoenix last month that was attended by over a dozen Proud Boys, even though a federal judge had ordered him not to associate with any members of the extremist group.

Pictures posted online and a video obtained by CNN from an attendee show Micajah Jackson near a group of Proud Boys, spouting conspiracies about January 6.

One picture, posted by Jackson on Twitter, shows him posing with a Republican congressional candidate who praised the Proud Boys in attendance during his speech that day. A man in Proud Boys attire, not with the pair, stands in the background behind them at the event

January 6 defendant spoke at far-right rally attended by Proud Boys, despite court order against associating with the group https://t.co/dMUSR4bnRv

Previous Docs: Facebook Knew Its Algorithm Pushed Extremism
Next Turkey Set To Expel US And Other Western Diplomats