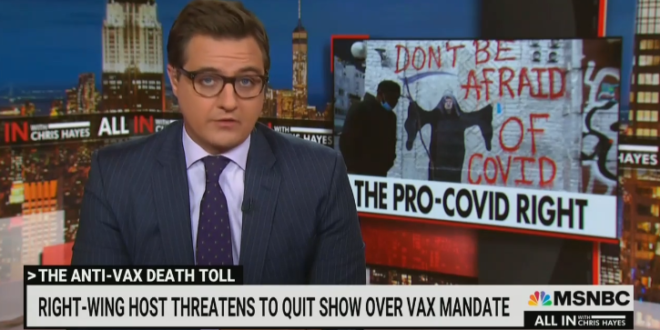 “Now, I should tell you, that guy threatening to quit over a vaccine mandate is in fact fully vaccinated. And a part of me wants to give him credit for sticking to his principles and at the very least calling out his employer over its vaccine policy.

“Something that as we have noted repeatedly people like Tucker Carlson don’t have the courage to do.  But, the thing is, like Tucker, Dan Bongino is also a Fox News host.

“And weirdly enough, he has not threatened nor said one single word about Fox’s strict vaccine protocols — that you either vaccinate or test daily. I guess the tough guy routine only goes so far.” – MSNBC host Chris Hayes, last night.