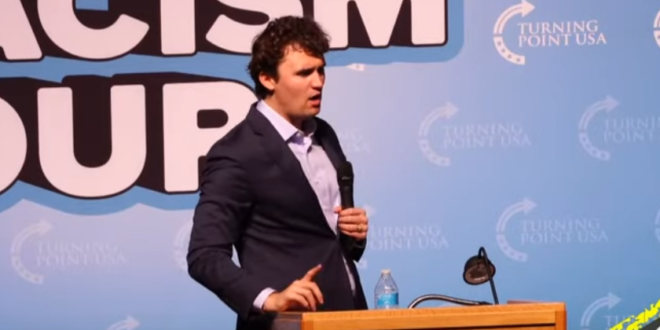 Charlie Kirk Flustered After Supporter Asks “When Do We Get To Use Guns,” When Do We “Kill These People?”

Here’s the transcript of how the exchange started:

AUDIENCE MEMBER: You’re brave. You’re brave for what you say, and the fact that you stand up there and say it, and I appreciate it. I think we all appreciate it actually, because there’s not a lot of people that have the balls to do it. But I want to ask you something a little bit out of the ordinary, so prepare yourself.

At this point, we’re living under corporate and medical fascism. This is tyranny. When do we get to use the guns? No, and I’m not — that’s not a joke. I’m not saying it like that. I mean, literally, where’s the line? How many elections are they going to steal before we kill these people?

CHARLIE KIRK (TURNING POINT USA FOUNDER): So, no, I – no, hold on. I – no – stop, hold on. Now, I’m going to denounce that and I’m going to tell you why. Because you’re playing into all their plans and they’re trying to make you do this. That’s OK. Just hear me out.

The clip below is cued up. The question was asked at a Boise State University stop on his “Exposing Critical Racism” tour. Listen to the applause from college students after the question.

Charlie Kirk Gets Asked at TPUSA Event: ‘How Many Elections Are They Gonna Steal Before We Kill These People?’ https://t.co/BAM5xjfLHW