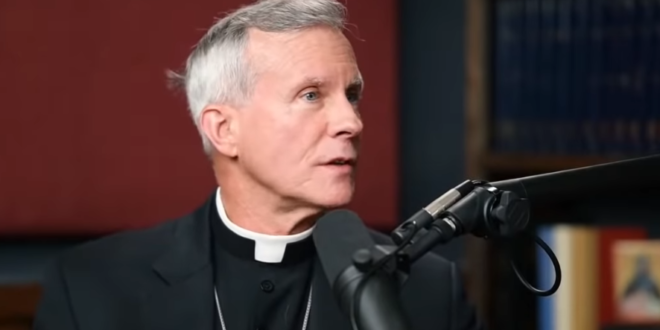 Catholic Bishop Goes Full QAnon: The Storm Is Upon Us

A conservative Catholic bishop in Texas praised a speech by actor Jim Caviezel this week, lauding remarks that included criticism of Pope Francis and were delivered at a conference connected to QAnon. Bishop Joseph Strickland, who heads the Diocese of Tyler and is known for his controversial brand of conservatism, tweeted out a link to a website praising Caviezel’s speech, with the prelate insisting “all need to listen” to its message.

By then a clip of the speech had already been widely shared on social media in which the actor recites a line from Mel Gibson’s 1995 movie “Braveheart.” The speech took place at the “For God & Country: Patriot Double Down” conference convened in Las Vegas over the weekend. The speakers also included Couy Griffin, a pastor and founder of Cowboys for Trump who has said he believes former President Donald Trump was “ordained by God.”

Read the full article. In QAnon parlance, the “storm” is when Trump’s secret military force arrests and executes hundreds of Democrats and celebrities for their Satanic child abuse rituals.

All need to listen to this speech “Freedom is the right to do what we ought”…..Jim Caviezel: HISTORIC SPEECH & “The Storm is Upon Us” @ The TPV Patriot Double Down in Las Vegas | Media https://t.co/vytGo5B1TI

Jim Caviezel gives a speech riddled with religious fanaticism and Q propaganda at the QAnon conference in Las Vegas. pic.twitter.com/9gugWfoyaG