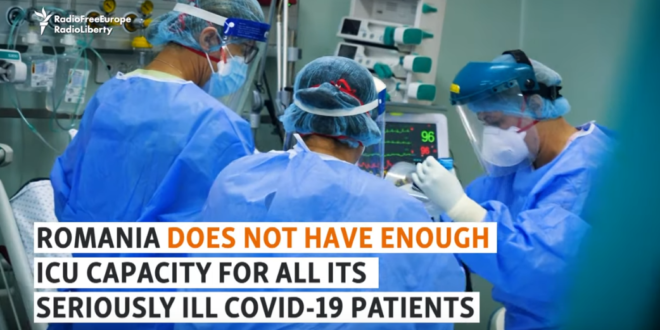 The number of new coronavirus infections in Romania — with the second-lowest vaccination rate in the European Union — rose by 13,854 in the past 24 hours. Romania, one of the poorest countries in the EU, is suffering from a spike in deaths as a fourth wave described as “catastrophic” by President Klaus Iohannis takes hold.

The record — 15,037 infections — had been registered on October 5. A total of 1,332,221 cases have been registered in Romania since the start of the pandemic. Lines of ambulances have been waiting outside several hospitals in Bucharest and the northeastern city of Iasi for beds to become available, television footage showed.

Doctors at the infectious-diseases hospital in Iasi on October 8 urged the authorities to impose an immediate lockdown to curb the infections. Just one intensive-care bed was available on October 8 in the country of 19 million.

Read the full article. Plans are underway to transfer some patients to neighboring countries under an EU agreement. According to the above-linked article, anti-vax sentiment has been inflamed locally by false claims on social media.

The number of new coronavirus infections in Romania — with the second-lowest vaccination rate in the European Union — rose by 13,854 in the past 24 hours.https://t.co/p1VLchAmTX