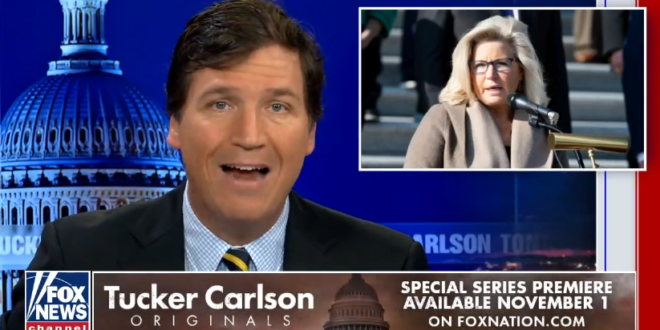 The one reaction Carlson picked out to respond to came from Congresswoman Liz Cheney (R- WY). Cheney ripped Fox for giving Carlson a platform to “spread the same type of lies that provoked violence on January 6.”

Carlson only showed that part of her tweet, but not the rest of it, which said, “As @FoxNews knows, the election wasn’t stolen and January 6 was not a ‘false flag’ operation.”

This was how Carlson summarized that part: “Cheney made her point explicit. ‘Deplatform his show at once.’ This is not CNN. We work for Fox News. Our bosses don’t pull people off the air just because some screechy little politician doesn’t like what we say.”

Re-upping this tweet so everyone can see the whole thing, including the part @TuckerCarlson was afraid to show. Tucker: are you still falsely contending the voting machines were corrupted and the election was stolen? https://t.co/SHpqhST65a

Tucker calls Liz Cheney a coward for not appearing on his show pic.twitter.com/rCSyXC0hVR

Politicians don’t get to put parameters around your thoughts or conversations. Free people are allowed to ask any question they want. pic.twitter.com/NK6QrYncal