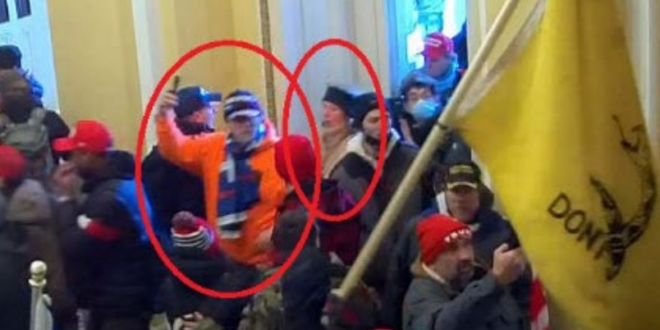 Capitol Riot Couple Gets Off With $5000 Fine Each

A federal judge who imposed the highest possible fine — but no prison time — as punishment for breaching the U.S. Capitol building on Jan. 6 said that he wanted the sentence to send a message. “I want the sentence to hurt,” U.S. District Judge Reggie Walton said during a sentencing hearing for Lori and Thomas Vinson on Friday. “People have to understand if you’re doing something like this, it’s going to hurt.”

Prosecutor Mary Dohrmann had asked for Lori to be sentenced to 30 days in prison, largely because of her “very public and clearly doubling down” statements she made after losing her job as a nurse when her employer discovered that she was in the Capitol on Jan. 6. “I hope that is something I remember and say, ‘I’m glad I was a part of that,’ 30 years from now,” she told local NBC affiliate WFIE shortly after she was fired.

Read the full article. The Vinsons must each pay a $5000 fine and perform 120 hours of community service. Prosecutors had sought 30 days in jail for Lori Vinson.

Lori Vinson up. “I’d like to start by apologizing.”

She talks about devastation and embarrassment of losing her job for things that were never in her heart. Gonna have a lasting impression on her reputation, for probably rest of her life.

Judge Walton says he finds it “unbelievable” that Lori Vinson wouldn’t have understood she was part of a mob “invading” the Capitol, and is incredulous that she then did interviews after saying she was proud of it

AUSA reads the quotes featured in the govt’s sentencing memo from Lori Vinson’s media interviews, including: “People have asked are you sorry that you done that, absolutely I am not, I am not sorry for that, I would do it again tomorrow” pic.twitter.com/IhqTc9JIF0

[UPDATE] Lori Vinson has been sentenced to 5 years probation, 120 hours of community service and a $5,000 fine after pleading guilty to the standard misdemeanor for non-violent offenders https://t.co/TVEt8g8tlE #SeditionHasConsequences #SeditionTrack

Two days after her first FBI interview, Lori Vinson updated her Facebook profile with a “Back the Blue” frame.

Then — after she’d already spoken with the FBI — she did a local TV interview and provided the station with incriminating evidence because she was upset she was fired. pic.twitter.com/wX2D8A29TB

I’m sorry Lori Vinson, but not owning tactical gear you can wear to an insurrection doesn’t earn you any points or a get out of jail free card. #LoriVinson https://t.co/jHtfOoZcyO pic.twitter.com/bOGsC9C8h7

Previous Fully Vaxxed Definition May Change Due To Boosters
Next Ben Shapiro Hires Reporter Who Quit Over Vaccine Mandate: “We’re Excited To Slap ESPN In The Face”