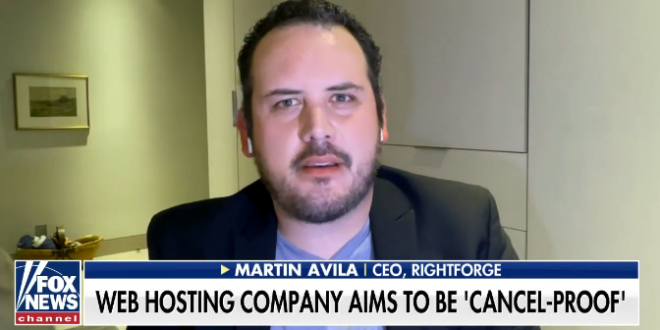 Representatives affiliated with the Trump network declined to comment on whether RightForge is their provider, and Trump’s business deals are notoriously messy and full of reversals. RightForge is preparing for Trump’s new social media network, Truth Social, to have more than 75 million users, Avila said.

Avila, a self-taught computer programmer, started a website development company in high school and has since moved seamlessly in and between the worlds of tech and politics — particularly where the two intersect. He worked for the Ron Paul Presidential Campaign of 2008 as well as the successful election of Senator Mike Lee.

Avila was in D.C. on the day of the riots. “What happened that day was deeply troubling,” Avila readily acknowledged, “but the gravity of the other problem,” Big Tech’s ease at deplatforming ideological nonconformists, “is much bigger in my mind.”

RightForge owns and operates the hard infrastructure of the web, the “backbone,” to use Avila’s words, that will support and expand what will become essentially a second internet, an internet free from interference and censorship by the self-appointed woke internet custodians of the truth of the Big Tech world.

Previous Trump Vows No Censorship On Coming Social Media Platform (Users Are Banned From Criticizing Platform)
Next POLL: 75% Of Republicans Say Humans Don’t Cause Climate Change, Most Say It’s Due To Natural Changes