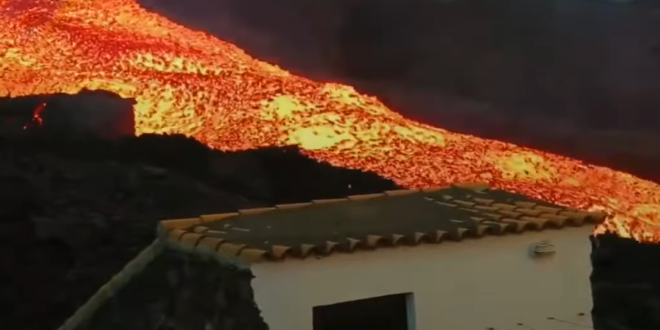 Experts have described the latest volcanic activity on La Palma as a “tsunami of lava”. Huge rivers of molten rock have been spewing from the crater in recent days after a 4.5-magnitude earthquake shook the island on Thursday and intensified flows.

The quake is the strongest recorded since the Cumbre Vieja volcano — on the island of La Palma in the Spanish Canary Islands — began erupting almost a month ago. “Today one of our crew was able to film a truly lava ‘tsunami’. Amazing speed and overflow of the lava channel,” said the Canary Islands Volcanology Institute.

Almost 7,000 people had been evacuated by Thursday, and more than 1,500 buildings have been destroyed, according to the European Union’s emergency response coordination center.

There are two volcanic centers on La Palma, and Cumbre Vieja is the southern and youngest one, according to the Smithsonian Institution’s Global Volcanism Program.

Cumbre Vieja is the most active volcano in the Canary Islands, it said. La Palma, which has a population of around 85,000, is one of eight main islands of the archipelago off the northwestern coast of Africa.

Watch as a “tsunami of lava”, captured by the the Canary Islands Volcanological Institute, flows from the La Palma volcano pic.twitter.com/b8HUCrR1FQ