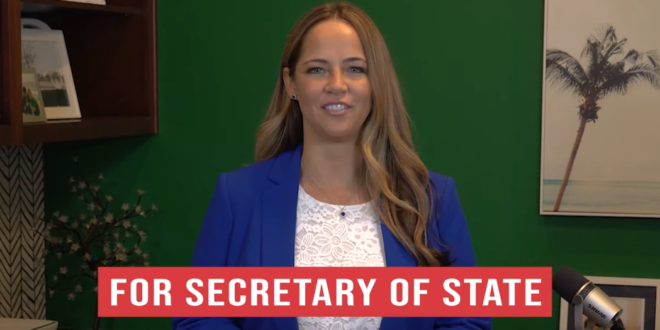 CA Sec Of State Candidate: I Repelled A Killer In Jesus’ Name And Sent Him To Murder The Witches Next Door

“I am a prophetic dreamer. That means I see things in my dreams before they happen. God speaks to me through my dreams and shows me things. I had a dream in which someone has tried to break into my home and murder me and light my house on fire.

“I wake up and I pray. I use my authority in Jesus name and say no, nobody is going break into my home, or murder me, or light my house on fire, or harm me in any way.

“I go back to sleep. I wake up in the morning and I call home and my mom says you are not gonna believe what happened last night. You know the witches, the self-proclaimed witches, that live two doors down?

“Someone broke into their house, murdered her, and lit the house on fire. I of course was like excuse me, what did you say? Something you should know is that part of using your authority in Jesus name, is when I was praying against what I saw in my dream.

“I said, if anyone has sent that to me, if someone has intended to break into my house and kill me and light my house on fire then I not only will not receive that but I am sending that right back to them in Jesus name.

“I did not even know how much authority I had in that situation, until I called my mom and found out that the very thing I had just dreamed that someone was trying to do to me had happened to them.” – California GOP secretary of state candidate Rachel Hamm.

Trump and Bannon feature in her campaign clip below.

Rachel Hamm, a GOP candidate for secretary of state in California, claims that she had a dream that someone was going to break into her house and murder her. She brags that she prayed it away and instead her neighbor, who was a witch, was murdered. pic.twitter.com/Q6mB3xmLmD