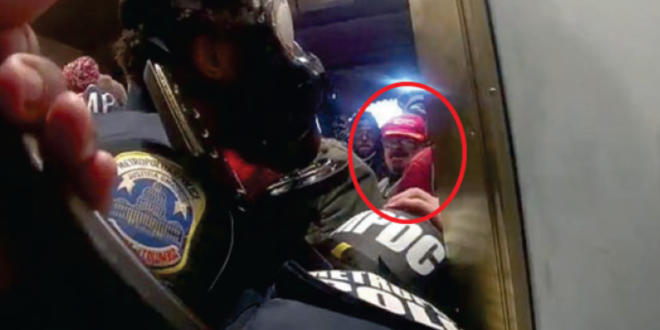 Federal agents arrested an Orange County man Monday who they said was seen fighting with police officers on the steps and in a tunnel behind the inaugural platform of the U.S. Capitol Building during the Jan. 6 attack by thousands of supporters of then-President Donald Trump.  Federal documents show Kim Michael Sorgente was taken into custody when U.S. Marshals served a search warrant for him in Santa Ana.

“How dare you? How dare you, traitors?” a man identified as Sorgente screamed through a megaphone after he stumbled to the ground amid a mob of rioters scuffling with Capitol police over a metal barricade. “How dare you traitors?” The investigating FBI agent said Sorgente was wearing a red “Make America Great Again” hat and a T shirt with the words “Deus Vult” (God wills it) on it.

Read the full article. Sorgente, who was previously arrested for assault at December “Stop The Steal” rally, is allegedly seen on video in the crush of protesters attempting the breach the tunnel at the top of the inauguration stands. He reportedly attempted to help the female rioter who later died after being trampled. Sorgente faces 15 years in federal prison.

NEW: Kim Sorgente, known to #SeditionHunters as #BadSamaritanGrey, was arrested by the FBI in California. He was 263-AFO on the FBI list, and was previously charged in Orange County Superior Court in connection with assaults at a “Stop the Steal” rally in December 2020. pic.twitter.com/NuT0VMEKGs

[BREAKING] Kim Sorgente (FBI-263) has finally been arrested. He has been causing all sorts of problems at demonstrations in California before and after J6. #BadSamaritanGrey https://t.co/ZtLe1MBAZm

Court has unsealed a Jan 6 case against Kim Sorgente of California. Sorgente is accused of pushing against police line near Archway.

Sorgente allegedly shouted into megaphone at police, “How does it feel to be a traitor? What the f*** do you think you’re doing ?” pic.twitter.com/03ikKPr4eM

Sorgente is a well-known figure in Orange County, where he frequently appears at county government meetings to protest COVID-related restrictions. (That’s where I met him earlier this year.)

Some locals were surprised he had not yet been arrested, given his prominence. https://t.co/F0wxvNZ31C