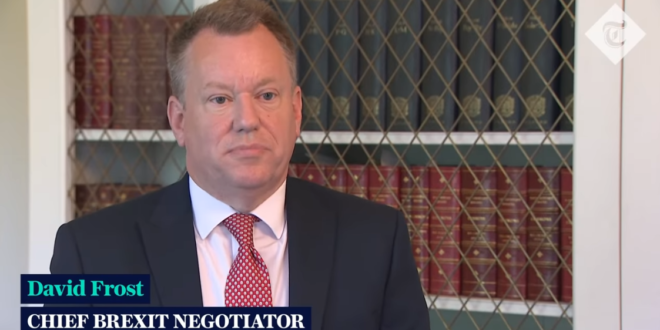 Britain And Ireland Bicker On Twitter Over Brexit Deal

Britain and Ireland traded barbs on Twitter on Sunday after British Brexit negotiator David Frost restated his view that the EU must agree “significant change” to the Northern Ireland protocol that governs trade and border rules in the province.

The protocol was part of the Brexit settlement Prime Minister Boris Johnson negotiated with the EU, but London has repeatedly said it must be rewritten less than a year after taking force due to the barriers businesses face when importing British goods into Northern Ireland.

The row comes at the start of an important week in the long- running debate over how to manage the flow of goods between Britain, Northern Ireland and the EU. The European Commission is expected to present new measures on Wednesday to smooth trade, while stopping short of the “significant change” London is demanding to the protocol.

EU working seriously to resolve practical issues with implementation of Protocol – so UKG creates a new “red line” barrier to progress, that they know EU can’t move on…. are we surprised?
Real Q: Does UKG actually want an agreed way forward or a further breakdown in relations? https://t.co/4MhgEdlxAf

1. I prefer not to do negotiations by twitter, but since @simoncoveney has begun the process…

…the issue of governance & the CJEU is not new. We set out our concerns three months ago in our 21 July Command Paper.

The problem is that too few people seem to have listened. https://t.co/Y7DDdgu0pC

But there needs to be significant change to the current situation if there is to be a positive outcome.