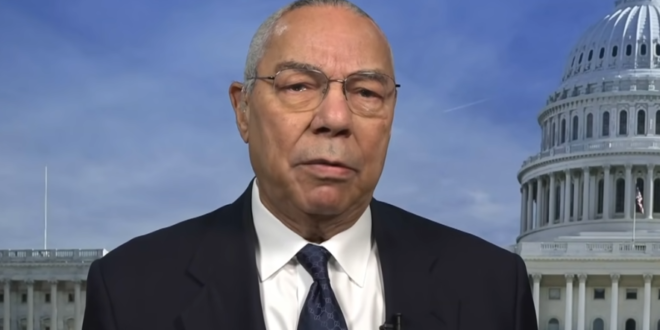 General Colin Powell was a patriot of unmatched honor and dignity. The son of immigrants, born in New York City, raised in Harlem and the South Bronx, a graduate of the City College of New York, he rose to the highest ranks of the United States military and to advise four Presidents.

He believed in the promise of America because he lived it. And he devoted much of his life to making that promise a reality for so many others. He embodied the highest ideals of both warrior and diplomat. He led with his personal commitment to the democratic values that make our country strong.

He repeatedly broke racial barriers, blazing a trail for others to follow, and was committed throughout his life to investing in the next generation of leadership. Colin Powell was a good man who I was proud to call my friend, and he will be remembered in history as one of our great Americans.

As a mark of respect for General Powell and his life of service to our Nation, I hereby order, by the authority vested in me as President of the United States by the Constitution and the laws of the United States of America, that the flag of the United States shall be flown at half-staff at the White House and upon all public buildings and grounds, at all military posts and naval stations, and on all naval vessels of the Federal Government in the District of Columbia and throughout the United States and its Territories and possessions until sunset on October 22, 2021.

I also direct that the flag shall be flown at half-staff for the same length of time at all United States embassies, legations, consular offices, and other facilities abroad, including all military facilities and naval vessels and stations.

At 119PM ET, flags above the White House lowered to half staff by @POTUS to honor Colin Powell. @CBSNews pic.twitter.com/4zM9gBcl7W

Previous Because Jesus: Kanye’s Full Legal Name Is Now “Ye”
Next Bongino Taunts Radio Giant To Fire Him Over Mandate