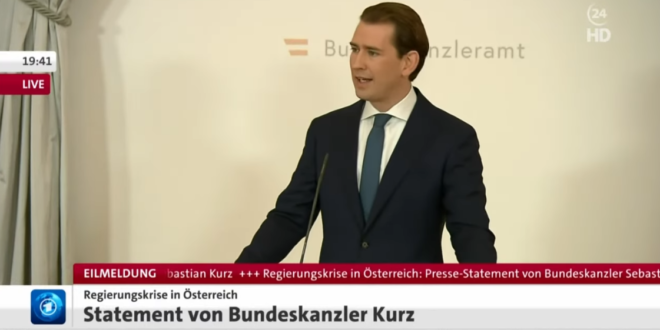 Chancellor Sebastian Kurz of Austria announced on Saturday that he would resign, days after prosecutors launched a criminal investigation into allegations he used federal money to pay off pollsters and journalists for favorable coverage.

The move came amid intense pressure from all sides, with Mr. Kurz’s partners in the government, the Greens, threatening to quit the coalition unless his conservative People’s Party replaced him as chancellor. The country’s president issued a stern statement urging all players to put party politics aside in the interest of stability.

“I admit that it is not an easy step for me,” Mr. Kurz told reporters at a news conference in Vienna on Saturday evening. “My country is more important than my person. What it needs is stability.”

The corruption allegations against Kurz have caused a crisis in the Austrian government. Before Kurz’s resignation Saturday, opposition parties had threatened to bring a vote of no confidence against him in parliament on Tuesday.

Elected to the chancellorship in 2017, Kurz shrewdly turned one of Europe’s biggest crises — the refugee influx of 2015 — into a vote-winner at the ballot box.

Kurz arrived in power just as Chancellor Angela Merkel’s grip in neighboring Germany appeared to be weakening. He seemed keen to dismantle at least some of her welcoming approach to migrants and take the continent down a more hardline path, despite insisting regularly on his support for the European project.

Kurz first appeared on JMG in 2017 when observers worried that his election signaled Austria’s lurch to the far-right. Elected at age 31, he was the world’s youngest national leader.

BREAKING: Austrian Chancellor Sebastian Kurz says he’s quitting after prosecutors opened a probe into whether he funneled public funds to a newspaper publisher in exchange for favorable coverage.https://t.co/5eFwwFeUOr

Previous Tallahassee Police Chief: I Was “God’s First Choice” For This Job, My “Number One Priority” Is To Proselytize
Next Trump Aide Finally Served Subpoena At Mar-A-Lago