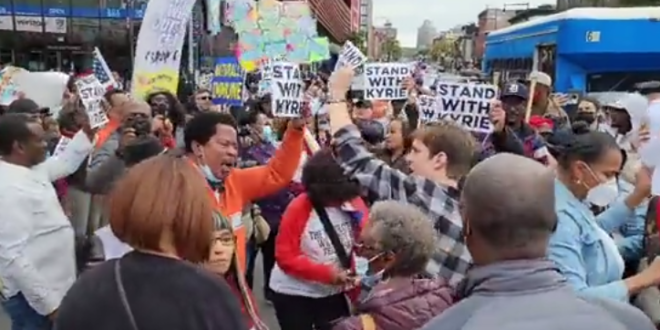 A chaotic scene has developed outside the Barclays Center, the home for the NBA’s Brooklyn Nets, where anti-vaccine protesters knocked down security barricades and attempted to break down the doors to the arena.

Media on the scene tweeted several videos showing the protesters, some of whom were wearing “Stand With Kyrie Irving” shirts or carrying signs, pushing aside or knocking down metal security barricades and swarming towards the arena’s doors.

On the other side of Barclays and the protesters against a vaccine mandate, there’s multiple COVID-19 testing tents. https://t.co/AwUKlPpVq6

Protests outside Barclays. Signs being handed out that say “Stand with Kyrie” being pic.twitter.com/MzOyevwit8

Footage from inside Barclays Center, where “Stand With Kyrie” protesters appear to be trying to get INSIDE the arena pic.twitter.com/JWLLCs1cm4

Happening in Brooklyn right now: Anti-vaxxers have broken down barriers at the “Stand with Kyrie Irving” protest at the Barclays Center

“Barclays Center briefly closed its doors today in order to clear protestors from the main doors on the plaza and ensure guests could safely enter the arena.” (1/2)

“Only ticketed guests were able to enter the building and the game proceeded according to schedule.” (2/2)

anti vaccine mandate protesters storm the entry way at Barclays center and fight with security as they try to breach the stadium pic.twitter.com/9d9cHWHZWF

Chants of “no vaccine mandates, stand with Kyrie” as New Yorkers hit the Barclays center in support of Kyrie Irving who was dropped for refusing the experimental covid vaccine. pic.twitter.com/Md065OYsHX

today i had to fight my way through an anti vax rally to get a pcr at barclays center and it’s weird how similar the vibe was compared to the querdenken marches i have seen back in germany pic.twitter.com/VJD97o3tIr

Previous DeSantis Plans $5K Hiring Bonus To Lure Out Of State Cops Who Get Fired For Refusing To Get Vaccinated
Next Homocon Rioter: Post My Photo And Send Me Money